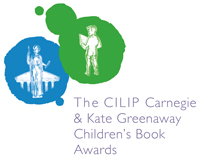 This evening the Youth Libraries Group London is meeting to decide which books they will put forward as a group vote for the CILIP Carnegie Greenaway awards awards this year.  The committee has decided on a shortlist and each of us is going to tout one or two of them to the rest of the group.  The Kate Greenaway award is for an outstanding picture book, as I don't see many picture books nowadays I'll enjoy watching the others pitch them.  I'm nominating My Sister Lives on the Mantlepiece by Annabel Pitcher  for the Carnegie, which is for an outstanding piece of literature for children or young people - here's my pitch:


Her first book, it is for a younger audience than many other Carnegie contenders or past winners, has a lovely simple and accessible style.
It is a story about a family coping, or not, with the death of Jamie's older sister Rose in a terrorist attach a few years before we meet them.  Mum deals with it by running off with a member of her support group, Rose's twin sister Jas deals by rebelling against their parents' image of her.  Dad deals with it by turning to drink, and turning against Muslims who he blames for his daughter's death.
Jamie, our protagonist, is too young really to remember Rose, and believes his Dad when he says that moving to the Lake District will be a fresh start, until Rose's urn goes straight on the mantlepiece and he finds empty vodka bottles in the recycling.
To make matters worse, in his new school he is sat next to <gasp> a Muslim girl who, shock horror, turns out to be lovely.  We follow his innur turmoil as he tries to reconcile his feelings for her with the opinions of his father, and as she turns into his best friend, trying to keep her a secret.
It is a very moving and well written book, a perfect candidate for the Carnegie!

The others being put forward for the Carnegie are:
My Name is Mina - David Almond
0.4 - Mike Lancaster
Small Change for Stuart – Lissa Evans
Noah Barleywater Runs Away – John Boyne
One Dog and His Boy – Iva Ibbotson
I've read My Name is Mina and Noah Barleywater, have you read any yet?  I'll let you know whether I can persuade a room full of Librarians that my choice is the right choice!
Posted by CazApr1 at 15:28