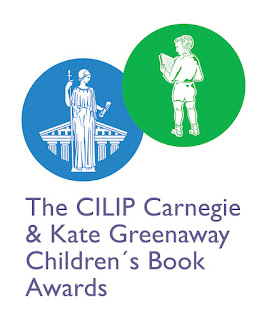 I don't have a Carnegie shadowing group at school, the library is too busy for me to be able to concentrate on a reading group after school so I just make do with informally saying to regulars 'read this, it is amazing and it has been shortlisted for the Carnegie', followed with an explanation as to why that is important.  What I am doing, for the 3rd year now, is shadowing the Kate Greenaway award with a group of Year 7s in their weekly lesson.  Today I told them about the award and showed them some previous winners, then introduced them to the books by making them "Judge a book by it's cover".  Obviously they can't be trusted to just look at the covers and not open the books, so I wrapped them in cling film first and gave them about a minute per book to rate them out of 5. 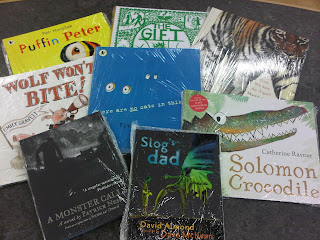 While I totted up their scores they had a browse of the previous winners and shortlists to see what kind of thing appeals to the Greenaway judges, and then I announced our favourites so far.  Next lesson we will only look at the 4 they liked the least based on the cover, those were 'Solomon Crocodile', 'Wolf Won't Bite', 'Puffin Peter' and 'The Gift'.    We'll discuss the criteria for the award and actually open the books this time, ooo, and get to know them a bit better.

The winner will be announced in about 9 weeks, we won't have 9 lessons looking at the books as there are other things to do as well, but I'm planning a few more sessions for us to whittle the shortlist down to our favourite.

I was surprised to see that the overwhelming favourite so far is 'Can we Save the Tiger?', I'll be interested to see how much opinions change when they see what's inside them all!