For those of you not in the know, this weekend was the joint conference of three bodies that care greatly about children and reading:
CILIP Youth Libraries Group
CILIP School Libraries Group
School Library Association
I am a member of all three, and on the London Committee of the YLG.  Each group usually holds their own annual conference, but for the first time since 2000 they decided to join forces for a mega conference and came up with a really packed programme.  Inspirational speakers from all sides of youth librarianship and literacy gave ringing war cries to promote our services 'outisde the echo chamber' and 'shout about' school libraries.  Authors, poets and storytellers entertained us with their creative minds and made clear their support for what we do (they judged their audience well for roaring rounds of applause!).  Enthusiastic publishers loaded us down with tonnes of proof copies and promotional materials for their Carnegie and Greenaway hopefuls of the future...it was non-stop, from checking in at noon on Friday to leaving at 2.30pm today.  I don't want to regurgitate everything I heard so if you're interested in detail it is worth searching #LTF12 on twitter or looking at the tweets collated by John Iona, taking out some of the more irreverent observations, on storify.  I just thought I'd share a few of my highlights:

I really enjoyed the panel discussion about reading and technology on Friday afternoon with three very eloquent and knowledgeable panelists.  Bev Humphrey talked about using new technologies to support literacy while Jonathan Douglas made the point that the Reading Agency's research into reading habits have shown a decline in reading in all formats, but that children are accessing story in new ways that still promote language and creativity.  Dave Coplin, from Microsoft, won the crowd over talking about how what he does should support what we do and that, if anything, the existence of the Internet makes a Librarian more important for curating and finding knowledge.  He said he doesn't see the point in teaching how to use particular software, but teaching children critical thinking and research skills is vital. 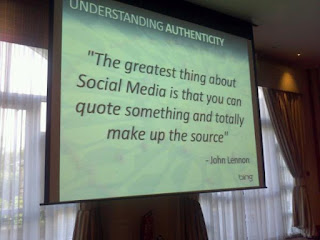 Storytelling over dinner capped off the evening wonderfully, I enjoyed listening to John Agard so much that I had to rush to the bookshop to buy a book of his poetry for him to sign.
Saturday's intense but rousing panel discussion around 'Reading in the political spotlight' with a stellar panel was excellent.  My favourite quotes were from Aidan Chambers, who made it clear that he disagreed with government interference in the work of specialists, and that we must not confuse the profession of teacher with the act of teaching because as Librarians we can teach more!  Simon Mayo chaired the panel and made some great points himself about the tangible difference between a school which holds it's library at it's heart and one that doesn't have one.  Again, the after dinner entertainment was fantastic, with Morris Gleitzman keeping the room silent for an hour with his fascinating life story.

Kevin Crossley-Holland, in his role as President of the SLA, gave a wonderful closing speech on Sunday, telling us he firmly believes that a well stocked, well-funded library should be the cornerstone of every school in the country and he is prepared to work hard for us during his presidency.

All of the whole delegate sessions were fantastic but, to be honest, I was disappointed by the workshops I was allocated. I decided not to tell you which ones I went to because others might have found them useful but I found that they were on matters that I have personally considered a lot already and, one in particular, I felt I could have presented a better session about myself! They hadn't been my first choices so hopefully most people didn't feel the same way as me.

The exhibition of publishers and library suppliers was great fun. Now that I've been on the London Committee for a few years I've talked to a number of the publicists and it was nice to be recognised and have books pushed into my hands almost immediately. Meeting up with Librarians I know well or only see at events, or even that I'd not met in person but have tweeted regularly, was excellent and I left with an awful lot to carry home!﻿
Of all the books I picked up I think the 3 I'm most excited about the Darren Shan, Elen Caldecott, and Sally Gardner.  I also picked up a nice little heap of non-fiction for school.
Posted by CazApr1 at 21:58