No Passengers Beyond this Point by Gennifer Choldenko 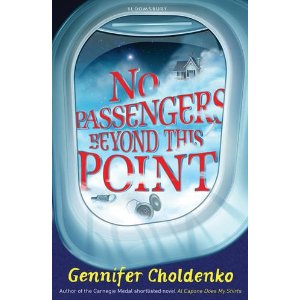 I don't understand how I've not seen loads of reviews for Gennifer Choldenko's latest gem 'No Passengers Beyond this Point'!  I didn't even know it existed until I saw it on the shelves in a public library (where would we be without them eh?) and it has been out since May 2011 in the UK (Feb in America) so I've missed the chance to put it on the CKG longlist for this year, boo.  Hopefully someone else in CILIP found it in time, but anyway I digress...


Three siblings - India, Finn, and Mouse - have less than forty-eight hours to pack up all their belongings and fly, without Mom, to their uncle Red's in Colorado, after they lose their house to foreclosure. But when they land, a mysterious driver meets them at the airport, and he's never heard of Uncle Red. Like Dorothy in Oz, they find themselves in a place they've never heard of, with no idea of how to get home, and time is running out.

In a total departure, Gennifer Choldenko tells a story of adventure and survival, set in a fantastical place with rules all its own. Sharp dialogue, high stakes, and taut action make this a book that will stick with you long after you read the incredible ending.
summary from Goodreads

It is a typical sibling relationship, with a selfish older sister, conscientious middle brother and loopy younger sister (I'd guess autistic although she never states that) but stretched by an atypical happening that is very well devised.  Their mum suddenly tells them that they have to move to their Uncle's house because they are losing theirs, and they have to fly there without her while she finished the term teaching.  Plot spoiler here: the plane they are on crashes but they don't know this, in fact the reader doesn't really, they think that they've landed in a strange place.  It turns out that the challenges they face will determine whether they survive or not.  All the way through (because I figured this out straight away, probably kids will too) I was worried, thinking "She can't possibly let them die but how can they survive a plane crash without a ridiculous miracle?" but I was actually really pleased by the end, which I won't spoil :-)

It is quite different to 'Al Capone Does my Shirts' (and '...Shines my Shoes') and 'If a Tree Falls and Lunchbreak', the other books by her that I've read over the years and loved, but it is still in her lovely child-friendly style.  As there is such an age difference in the characters, and there are chapters from each of their perspectives with well created voices, I'd highly recommend it for confident readers of all ages!
Posted by CazApr1 at 17:27