Nothing by Janne Teller

This book was originally written in Danish and published in 2000, but translated into English in 2010. It has won all sorts of awards, and for good reason!  Unfortunately because of the language issue it couldn't be eligible for the CILIP CKG awards in the UK.  Anyway...﻿ 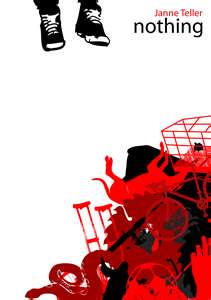 Pierre Anthon left school the day he found out that it was not worth doing anything as nothing mattered anyhow. The rest of us stayed behind. And even though the teachers carefully cleared up after Pierre Anthon in the class room as well as in our heads, a bit of Pierre Anthon remained within us. Perhaps this is why things later happened the way they did ...
Thus begins the story of Pierre Anthon, a thirteen year old boy, who leaves school to sit in a plum tree and train for becoming part of nothing. "Everything begins just in order to end. The moment you were born you began to die, and that goes for everything else as well." Pierre Anthon shouts and continues: "The whole thing is just one immense play which is about pretending and about being best at exactly that."

Scared at the prospects that Pierre Anthon throws at them together with the ripening plums, his seventh grade classmates set out on a desperate quest for the meaning of life. Nothing they do will make him come down, not even pelting him with rocks. So to prove to Pierre Anthon that life has meaning, the children decide to give up things of importance. The pile starts with the superficial—a fishing rod, a new pair of shoes. But as the sacrifices become more extreme, the students grow increasingly desperate to get Pierre Anthon down, to justify their belief in meaning.
summary from GoodReads﻿

Nothing is the only book by Janne Teller that I've read, it was really very short but packs a big punch!  Some of the reviews I've read compare it to Lord of the Flies, apt in that there is very little adult interference and the group mentality becomes pretty sinister and aggressive.  Their parents are there for them to go home to at night and they have teachers at school, but basically the teenagers have a lot of freedom to get into the state they do without anyone noticing.  It is a philosophical book, really makes you think about the meaning of life and 'stuff', as well as making you despair at the way their pile of meaning is overtaken by their spite caused by having lost something important to them.

It starts with shoes, photos, bikes, diaries, but moves on to far more spiritually and potentially devestatingly meaningful things.  It is hard to say too much without spoiling the empathy you'll feel when reading certain passages, I was certainly in turmoil at a couple of points and was squirming with discomfort on the bus this morning because of something particularly horrific.  At the same time, it is such a short story that the descriptions are quite superficial and the rest is in your head.  It is wonderfully written so hats off to the translator, Martin Aitken, for retaining the mood.  The only complaint I have is the lack of consequence for their actions.

On the cover, David Almond is quoted as saying "Bold, beautiful, terrifying.  One of the greatest young adult novels I have ever read".  I'm not sure I would go that far, and it is funny how every review I've seen either loves or hates it - definitely a marmite book - but I would agree that it should become a classic and a must-read for everyone.
Posted by CazApr1 at 20:41