The idea of having a week of literacy related activities in September was suggested by our Head of Inclusion (HoI), who became my line manager as of this term, in June and we started planning immediately.  Initially, she wanted every child to get a goody bag with stationery in it, maybe an author visit, and for departments to have a literacy focus in lessons that week...I think what we came up with is bigger than either of us anticipated on our minuscule budget!  Firstly, at the end of term I set a competition to design a logo for literacy week.  The picture below was drawn by one of our (now) year 10 girls.  This is on all the posters around the school and was stuck onto each of the goody bags. 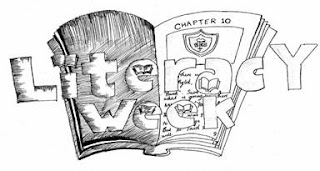 I sent an email to a few of my contacts in childrens' publishing, begging for goodies &/or authors that might be available.  As far as guests were concerned, after some very enthusiastic responses I realised we'd be able to have someone every day (more about them later...).  Scholastic did wonders with a huge number of bookmarks, posters, postcards and sample chapters from some brilliant recent books and smaller amounts came from elsewhere.  HoI asked if I could get a book for every pupil, again Scholastic saved me with their online warehouse sale at the end of last term, and I went to Makro and bought a huge pile of sweets.  I also had a bunch of loyalty cards made for the library, I was so excited when they arrived, and we put a newspaper (at the last minute this morning) and small leaflet about punctuation and grammar in there as well as a bunch of stationery.  It took about 5 hours last week to pack 350 bags, the only time I've been relieved by our decreasing roll, they were given out at the end of today by tutors and I had a swapshop in the library for anyone that wanted to change their book.  I had a choice of about 12 titles and had considered literacy levels and interest when I put them in the bags but about 20 pupils came and changed them. 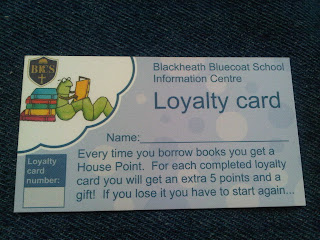 During the day today we had workshops with all of year 8 and one group of year 10 with Neal Zetter, a performance poet who works around London in schools and libraries for a very reasonable rate.  We were writing poems about food and just about every pupil got involved regardless of academic ability.  In fact, the lower ability group seemed to enjoy it most, and produced arguably the best poems, staying engaged and on task the whole time.  Neal did say before he came that 1hour sessions was his absolute minimum length of time, he prefers 90minutes, and that could be part of why the low ability session was a greater success as we stayed together across 2 periods.  I highly recommend getting in touch with Neal if you want to do something a bit different!
The best thing about this literacy week being 'sponsored' by the HoI is that she has the authority to get people to do things ;-) so every member of staff is getting involved somehow.  We have teachers reading stories at three locations every breaktime, literary themed lunches being served (I'll tell you more another day), literacy related starter activities happening in every department as well as a number of them organising their own competiitons.﻿..
There is so much more happening, I'll share later in the week!
Posted by CazApr1 at 17:59