Review: Lia's Guide to Winning the Lottery by Keren David

I loved When I was Joe and the sequel Almost True, so when I saw that Keren David had a new book out I was desperate to read it!  While it is the summer holiday I've not been in school so despite having ordered it it won't arrive until September, so I was really pleased to see that UK Book Tours was offering a copy to review! 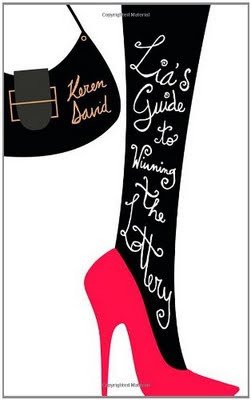 Money can’t buy you love. But it can buy many other very nice things. Lia’s mum is a nag, her sister’s a pain and she’s getting nowhere in pursuit of the potentially paranormal Raf. Then she wins £8 million in the lottery, and suddenly everything is different. But will Lia’s fortune create more problems than it solves? Everyone dreams of winning the lottery - but what’s it really like?
Synopsis from Amazon

Lia is an excellent main character, such a proper teenage girl, and I really enjoyed her voice. The characters are believable and at no point did I think 'that wouldn't have happened', with Lia's thought processes and understanding of situations sounding perfectly believable all the way through.  Saying that, I thought that the references to paranormal romance were brilliant, with the questions surrounding Raf's background keeping you guessing right up to near the end!

A couple of serious issues are broached in this book, Lia's best friend has recently become more religious, her younger sister has been bullied, and of course with a romance there's the physical aspect of a relationship as well as the emotional.  The 16 year old characters are very mature about it all and I thought it was well done.

It is a very different story to Keren's previous two novels with a much more lighthearted plot, but it is written with the same wit and style and so was equally enjoyable.  I'd expected a lot and I was not disappointed, 5/5
Posted by CazApr1 at 22:19