Continuing shadowing the CILIP Greenaway award with a group of Year 7s. Have a look at my last post about it to see what we've looked at so far.


I wanted to show my pupils that illustrating isn’t as easy as it looks today, with 2 of their favourite from the Greenaway shortlist.

Wolf Won’t Bite has deceptively simple illustrations while Can we Save the Tiger includes a lot of black and white pencil drawings with only some coloured.  I started the lesson by introducing them to the two books. 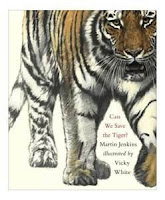 …Tiger is not a typical picture book with the beautiful illustrations being complemented by scientific descriptions of the animals, and the story told is all true, about how a variety of animals are in trouble due to human activity. I read them the introduction and pointed out some of my favourite pages. I read the whole of Wolf… to them because it is a nice, quick, funny story.

I had photocopies of some pages from each for them to get inspiration from – the task was to either draw one of the endangered animals or to think of something else the pigs could get the wolf to do! The class was pretty evenly split as to which book they chose – I was surprised that 2 out of 3 boys decided to draw the tiger – while a couple of them had brilliant ideas of how the wolf could be tormented further. I particularly liked the wolf jumping through a flaming hoop, and wasn’t sure whether to be a bit alarmed by the idea of the pigs cooking him in a cauldron to eat for dinner! I like to do a display of their drawings alongside a display of the books in the library, last year’s was great but it was a bigger class and so a bigger display, at the moment most of them haven’t finished their picture so hopefully I’ll have a couple more brought to me next week.


At the end of the lesson we had heads on desks and eyes closed to anonymously vote for our favourite of the two – the other we will not look at again as part of the challenge. It was a really close thing, with a number of them having trouble deciding because they love them both, but in the end Can We Save The Tiger won with 60% of the vote.

So still in the running as far as we're concerned: Can We Save the Tiger?, Slog's Dad, The Gift, Puffin Peter and A Monster Calls.  We finished reading Slog's Dad and thought it was really good, they found some of the illustrations very disturbing!  The only one we haven't yet looked at is A Monster Calls.  It is beyond most of them to read but I think I'll show them the clip of Patrick Ness reading an excerpt that is available on the shadowing site to give them a feel for it.
Posted by CazApr1 at 17:47